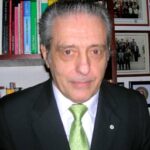 This article was originally published at Edición Calificada on September 30th, 2021.

Eduardo Filgueira Lima, a renowned doctor and member of “Libertad y Progreso” who was secretary of health of La Pampa and vice minister of health of Argentina, talked about how our government mismanaged the pandemic at Enfoque Social.

The latest statistics on Covid-19 in Argentina are encouraging. Cases are slowly declining and deaths follow the same path. What’s more, in some provinces no deaths from the disease were reported this week. There may be many causes, but surely the most scientific conclusion is that almost 45% of the population has received two doses of the vaccine.

Eduardo Filgueira Lima confirmed: “The pandemic numbers are stationary, which does not mean that the danger has completely disappeared. It is thought that a third wave may come, although we hope that it won’t happen. Faced with this, the National Government is committed to opening society, for example, taking off facemasks, but the people will pay the price if the measures do not work ”.

The economist warned that, if quarantine and the acquisition of vaccines had been handled better, the results would have been different: According to researchers if people had been vaccinated on time, between 22,000 and 40,000 deaths would have been prevented ”.

On the other hand, the government’s data upload system was never reliable regarding the number of Covid cases and deaths by percentage of the population. “In our country, statistics are very bad and the information system used to make health decisions is not timely. Furthermore, the definition of what a Covid case consisted of changed, and there were many cases that died with this disease but not from it that were considered Covid deaths. In addition, people that died from other causes and were counted as coronavirus deaths,” said Eduardo Filgueira Lima in dialogue with Sergio Solon.

“In practice, people are held captive by the organizations that finance their health care. Our health system demands freedom. In our country, its structure is fundamentally organized around a captivity system ”.

Finally, Eduardo Filgueira Lima explained his proposal: “It has three main points: the first is that the provinces carry out provincial insurance as a preliminary for them to take care of universal insurance. The second is to improve PAMI, which was created primarily for political reasons and has been involved in politics 99% of its time. The third point is to facilitate open competition between national social works and private insurance ”.