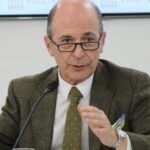 This article was originally published at La Razón (Spain) on October 2nd, 2021.

According to Carlos Rodríguez Braun, the IMF and the OECD have never been proponents of a free market or supported low taxes.

Received wisdom has insisted for years in the idea that we were dominated by the “free market fundamentalism” of the IMF and the OECD, who wanted to dismantle the nation-state. Pure lies. Those organizations were never supporters of free markets, and they never asked for lower taxes. Over time, they have gone on to clamor for intervention even more blatantly. At the same time, the media that criticized them for their supposed belief in free-market economics began to praise them as protectionists, which is what they have always been.

The OECD criticized (Madrid’s mayor) Isabel Díaz Ayuso with the progressive argument that tax competition should be avoided because it results in a race downwards. The press broke into cheers, without anyone opening their mouths to say that international organizations are political creatures that obey politicians.

That is why Mexican politician Ángel Gurría (PRI), former secretary-general of the OECD from 2006 to 2021, was applauded by politicians for asking to increase taxation and assuring that “the moment to spend continues”. When interviewed, he claimed that the 2008 crisis “was the product of little or bad regulation of financial institutions and rating agencies, a problem with American financial institutions”. He didn’t say a word about expansionary monetary policies that, both in America and the rest of the world, primed during the bubble. Naturally, he talks happily about increasing public spending, as if it were free and costs nothing.

Gurría continues to support intervention as if it had there were no consequences or contraindications. He praised greater European public spending because “Europe has never taken such an important step towards its integration as the decision to share risk, instead of leaving each country on its own. ” Leaving each taxpayer on their own, of course, doesn’t matter at all. There will be no “austerity” (except for families, of course) because “today, orthodoxy means spending” (that means that politicians spend). My favorite: “there’s no danger of inflation.”

Roberto H. Cachanosky December 14, 2022
PrevPrevious“If vaccination had been timely, between 22.000 and 40.000 deaths would have been avoided.”
NextWhat do we mean by economic equilibrium?Next