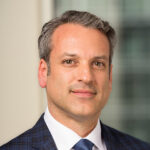 He has published articles in newspapers in the United States and Latin America and has appeared on television.

He is a member of the Mont Pélerin Society and the Council on Foreign Relations.

He received his BA from Northwestern University and his Master's degree from the Johns Hopkins University School of International Studies.

He worked in inter-American affairs at the Center for Strategic and International Studies and at Caribbean/Latin American Action.

CATO – Ian Vásquez considers that having achieved the vaccines against COVID-19 in record time is a product of globalization.

Historian Steve Davies reminds us of the poem by W.B. Yeats, written in the middle of the 1918 pandemic and in which these lines appear:

“Everything falls apart; the center cannot hold; mere anarchy is unleashed upon the world, the darkened tide of blood is unleashed, and everywhere the ceremony of innocence is drowned; the best lack all conviction, while the worst are full of passionate intensity ”.

Pandemics disrupt life and drive uncertainty. When people feel that their own lives are in danger and that the authorities are incompetent in dealing with the plague, when they feel other enormous insecurities – whether economic or public order – they lose confidence in the same social order.

Those feelings are understandable, but they create a dangerous moment. This is because, under these circumstances, questioning everything that came before often encourages extreme postures, intolerance and the desire to throw not only the bad but also the good out the window. Distrust affects even those who do not share an apocalyptic or cynical vision, but who begin to doubt the institutions and policies that have generated progress.

An example has to do with the opening of the market and globalization that have brought unprecedented advances in human well-being. However, many countries have become more protectionist and anti-immigration in recent years, with some interpreting the pandemic as a further negative consequence of openness.

But if there is one thing we can say, it is that the new vaccines against COVID-19 represent one of the triumphs of globalization. In January in this space I wrote how it is taking less and less time to develop vaccines. It took thousands of years to discover a treatment for smallpox, but less than a year to create vaccines against the current pandemic.

Such progress is unprecedented and is a product of globalization. Scott Lincicome documents that the talent, investment, research and development, and the production and distribution of these vaccines have been highly dependent on international integration. For example, the leaders of the three companies that have produced the vaccines have been migrants (from Turkey, Greece and Lebanon) to the United States and Germany, market democracies where they could exploit their talents.

Being a huge multinational, Pfizer was able to invest billions in financing the product while Moderna was able to raise billions for the same in the capital market. And despite the fact that distribution logistics is a complex challenge, companies have been able to depend on the networks and technology that international trade has developed for many years.

The coronavirus has been a global tragedy. It has cost nearly 2 million lives, economic downturns and the relapse of more than 80 million people into poverty. Still, human progress during this era of globalization has been so impressive that Johan Norberg estimates that only the years 2017, 2018 and 2019 have been better than 2020 in terms of per capita income, extreme poverty and infant mortality.

In 2020 we learned that the costs of losing basic freedoms and being more isolated are measured in economic, health and political stability terms, among other things. We learned how easy it is to lose perspective and hopefully how important the market economy continues to be as an essential part of freedom and human progress.

I take advantage of the space I have left in this, my last column for El Comercio, to thank the newspaper for having allowed me to share my opinions for almost seven years that, believe it or not, have been the best in the history of Peru.

This article was originally published in El Comercio (Peru) on December 29, 2020.