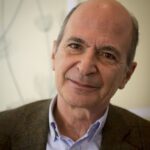 CATO – The interesting book by Steven Johnson, A Pirate Against Capital, published by Taurus, originally bears this title: Enemy of Humanity: The True Story of Piracy, Power, and the First Global Pursuit of a Criminal. It is longer, but also more accurate.

Dive into the eventful life of the famous English pirate Henry Avery, of whom, as Johnson says, “we know almost nothing before 1693 and almost nothing after 1696, but during those years he became the most wanted man in the world.”

After mutinying and stealing a ship in La Coruña, he embarks on a criminal career in the Indian Ocean, culminating in the theft of a luxurious ship from the Mughal empire, in which his men perpetrated rapes and murders. With the loot divided, the pirates disband. Some will be caught and tried in London, but of Avery would be lost forever.

Emperor Aurangzebm lashed out at the English and the East India Company, who had to convince him that piracy (no longer) was with them and that they would ensure the safety of the important maritime traffic between the Red Sea and India, and, of course, They would arrest Avery, described as an “enemy of humanity.” As the London prosecutor proclaimed: “Let us tolerate pirates and the commerce of the world will cease.” The pirates were effectively hunted down relentlessly, and trade flourished.

It is worth underlining the leading role of the State, which granted the capitalist friends of the East India Company a monopoly on imports to England; and indeed the company exercised executive functions in colonized India. For all this it was criticized by liberal economists, from Adam Smith himself.

It is true that the pirate life was idealized by its adventurerism and clothed with a proletarian myth: “A pirate ship was probably the most egalitarian community in the world.” So it was: not only egalitarian, but also democratic and fraternal. The crew received almost the same salary and there were common funds that functioned as a mini welfare state. This may underlie the reason why the Spanish translation attributes to Avery an enmity against capital. And indeed, the pirate was a socialist paradigm, and, as such, much admired.

But he was a complete anti-capitalist, as Johnson concludes, making a genuine summary of the history of socialism: “The pirates were mass heroes and the vanguard of a new, more equitable and democratic social order. But they were also murderers, rapists and thieves: enemies of all humanity ”. And, as is often the case with the heroes of anti-capitalism, Henry Avery was never tried for his crimes.

This article was originally published in Expansión (Spain) on October 12, 2020.

Diana Mondino November 2, 2022
PrevPreviousArgentina’s trade balance for September would have registered a surplus
NextWhat will happen to the exchange rate and demand for the blue dollarNext